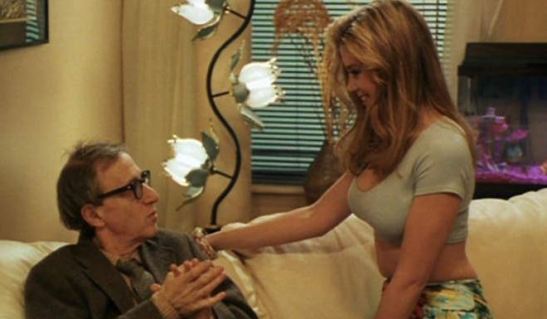 LINDA (Mira Sorvino): So then my mother married my third father… I don’t know if she married him, but he moved in. We didn’t get along. He was a disgusting drunk.

LENNY (Woody Allen): What about your hereditary father? Your actual, actual…

LINDA: Oh! He was a drug pusher. And he was also a car thief, and he picked pockets. And, you know, he burgled and stuff, and he was an epileptic.

LENNY: You haven’t left anything out, right?

LINDA: That’s what they caught him on.

LENNY: Hey, you got an appetite like a lumberjack here.

LINDA: I’m very hungry, actually. So then I ran away when I was fourteen. And I went away with this musician named Johnny. It was terrible, because we fought all the time. Finally, he committed suicide. And for years I thought it was because of my cooking. He always hated my clam sauce. And so then I kicked around from Chicago, Philadelphia…all over the place, and I ended up here.

LENNY: You never thought of just getting a regular job?

LINDA: Well, yeah, sure I did. I did things. I waited on tables. I worked in a massage parlour. I did phone sex. Now and then I would turn a few tricks to make some dough, and one day my friend Suzie calls me and asks me if I want to be in a film, something called Snatch Happy. I said sure, and I remember I was very nervous because I’d never done it in front of people with a camera before. So there I am on the first day, on the set, and there’s this guy fucking me from behind, right? And there’s these two huge guys dressed like cops in my mouth at the same time, and I remember thinking to myself, I like acting. I want to study.

LENNY: Yes, well, it’s… it’s one way of getting into the profession. Tell me about your family a little bit.

LINDA: I told you already. You could write a book by now.

LENNY: But were there any unusual members? Very bright ones, brilliant, talented…

LINDA: Yes, I’m sorry. There was. My father’s brother was supposed to be a genius. I never met him, but everybody said he was brilliant.

LENNY: Really? What did he do?

LINDA: He was a serial rapist. He spent his whole life in jail. But if he had gone straight, he might have been very good in math. I think I got my intelligence from him, because everybody else in the family is all slugs and lowlifes. I’m the only one with any ambition.

LENNY: Are you? And you never had a drive to get married?

LINDA: What for? They were all assholes. One of them used to beat me up. Another one used to fuck my best friend when I wasn’t looking. It was sickening.

LENNY: Really? And let me ask you this. At any point in your life did you ever think, like… maybe I’d like to have a child?

LINDA: I did have a child once.